I’m frazzled. So, this is going to be a short newsletter. I thought 2020 was more than bad enough but 2021 was even worse. It was hard to believe as we moved along a nearly endless stream of unthinkable catastrophes. From bizarre equipment failures, to endless rainfall that made it impossible to work outdoors for most of the summer, to household appliances that had to be replaced in total because parts were not available, to the worst of all, IDA. The hurricane removed a major portion of the roof which was found laying in the grass the following morning. The size of the insurance claim was stunning. And none of these events had any direct link to Covid-19 or any of its variants.

It is now mid-October as I write this article and the ground is slowly beginning to dry. But this is a double edged sword. On one side it is a tremendous benefit to the natural world. But on the other side, it opens the flood gates on all the chores that were not possible last summer. So, there is lots of work to be done on almost every level that I can think of from our individual families, home sites, and communities, to the status of our nation as a whole. It’s time to get ‘r done.

But before we get to work a short rest would be nice; a brief sabbatical. So let us all enjoy Christmas time once again. And, we hope to see each of you at this most magical time of year.


See page bottom for your personal notes from last season.

Your coupon is included as an attachment to this e-mail.
Refer to the bottom of this page for printing instructions.

To stop receiving this newsletter, Unsubscribe.

The schedule is shown below. As always should a Christmas tree emergency arise, call ahead and we will make every effort to accommodate your needs. 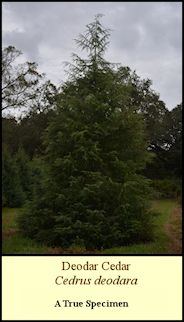 Deodar cedar has been grown at Shady Pond for many years. But this beautiful tree has rarely exceeded about 9-feet in height. This was no surprise in that most horticulturalists describe it as a slow growing tree. So in truth the real surprise came when we discovered that the Deodara shown in the photo was actually about 20-feet tall and was in fact the tallest tree in Field-D of any variety. So it ranks as a true specimen tree.

But Deodara occupied a magna cum laude place in the human experience for a stunningly long time. Its wood was the construction material of choice in ancient Egypt. The Egyptians used it to build temples, general purpose buildings, furniture and even sarcophagi (coffins)for mummies. And through the ages, Deodara became well-known for numerous medicinal uses. Even Deodara’s name and its origins are prestigious. It was derived from the Sanskrit word Devadora meaning ‘tree of the gods’. And Sanskrit was the classical language of ancient India. Sanskrit is believed to be the mother of all language predating both Greek and Latin.

Deodara is clearly at the top of the heap. And being a conifer, Deodara’s genome is 7-times bigger than the genome of a human. Its genetic profile contains 21-billion data points. With that much permanently stored resources, Deodara, and other conifers, are ready for just about anything.

Human recognition of this wonderful tree predates the construction of the pyramids which occurred in 2,630 B.C. So, we humans have shared our world with Deodara for more than 4, 651 years.

The combination of Cedrus deodara and highly skilled wood craftsmen has produced an immense number of artifacts that have endured for millennia. Shady Pond is honored to be able to grow these elegant trees for all our customers to experience. Can you imagine destroying this wonderful historical record as some today would want? How absurd.